The Elementary School and (no) discipline 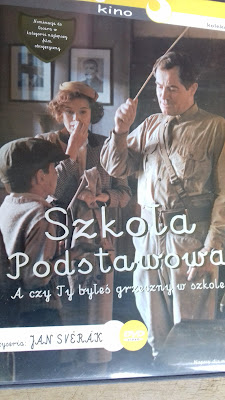 The story of Obecná škola (The Elementary School - in Czech) was written by Zděnek Svěrák who described his own experiences in the post-war Czechoslovakia. First as a pupil and later also as a teacher. He did it with humor, irony and nostalgia. A successful mix.

The story begins in 1945, after the World War II.  Ten-year-old boy Eda lives in one of the suburbs of Prague, in Czechoslovakia. He attends the elementary school and he belongs to a class with no discipline at all. Maxová, his female teacher gets a breakdown and is replaced by Igor, a reputed war hero. Despite his strict authoritarian methods, the boys soon become charmed by the man. Igor were successful if not the girls and their skirts…

That is the first film of the Svěrák family duo and the first on time passing and aging. With big history in the background. The next movie in this trilogy are Kolya (1996) and Empties (2007). All a kind of comedies and gentle dramas. The Elementary School (1991) was nominated for an Oscar as "Best Foreign Film" at the 1992 Academy Awards. Finally, few years later the statuette won Kolya. The Elementary School was the first non-documentary film directed by Jan Svěrák. We like the Svěrák father-son duo very much and hope to see their new movies.

lutego 16, 2018
Must Alpininst - Ghost Mountaineer   How to get surprised by good films from distant places? The easiest way is asking locals for tips when you are there. This wasn’t possible this time, but a friend of us happened to be in Tallinn for few days. “There is a good DVD department, go there - Paul told   him after having written down his want-list. - And then ask the shop assistant what he/she would suggest in addition to that list”. “And you really will pay for that all, not knowing what he'll suggest?" - our friend asked puzzled. “Yes, don’t worry! - Paul said. This is how we got Ghost Mountaineer (Must Alpinist - in Estonian).  That film was an excellent choice. Thanks to that unknown shop assistant!  And to our friend! Film from Estonia about Siberia in the 80. The film starts with some brownish amateur pictures and a women voice from the off. First we were not sure whether it's a documentary or a feature film. It turned out to be a mix, with the most pa
Prześlij komentarz
Czytaj więcej

Wolkenbruch – a successful Swiss comedy among the Jewish minority

listopada 28, 2018
Wolkenbruch - a successful Swiss  comedy When Paul was a boy his parents often drove via Zurich to Bern. The quickest way coming from the South passed through the so called Kreis 3. Especially on Saturdays this calm and seemingly boring part of Zurich turned into a different place. Bearded men with long black coats and big hats were walking around. – Who are they? – Paul asked his parents. – They are going to their church service – explained his mother. – Church, on Saturday? – Paul wondered.  Wolkenbruch - best Swiss film 2018 Almost forty years later, during our visit to Switzerland, the biggest cinema hit is called “Wolkenbruch”. The film staged exactly in this part of the city is a love story. A young orthodox Jew, Motti (Mordechai), feels attracted by his fellow student Laura, while his energetic and dominant mother tries her matchmaking skills within the Jewish community. After many fruitless attempts, upon a Rabbi suggestion, Motti’s parents send him to Isra
Prześlij komentarz
Czytaj więcej