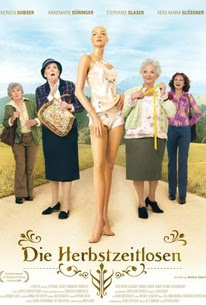 Four older women have an untypical business idea in the quiet and conservative Emmental region. That is the begin of the best Swiss comedy in recent years. When the enterprising seniors decide to convert a boring local corner shop into a chic lingerie store, their community is thrown into disarray. There are plenty of controversies and intrigues but the four ladies do not give up.

Wise comedy about and from Emmental

The 80-years-old Martha (played wonderful by Stephanie Glaser) and her team show in an amusing and wise way that it is never too late to pursue your own dreams. As “late bloomers” they learn to drive, to use Internet, to overcome all difficulties. And that with lots of humor and charme.

This movie (Die Herbstzeitlosen – in German) had its premiere during the Film Festival in Locarno in August 2006 and got standing ovations. It was Switzerland’s submission to the 80th Academy Awards for the Best Foreign Language Film. It was not nominee but it took the 3rd place in the rank of the best Swiss film ever.

Berlinale Awards 2020 and its Bears

marca 01, 2020
Berlinale 2020 - The 70th German Film Festival - Fot. Paul It was that time of the year again – for eleven days in February Berlin has been totally dominated by Cinema. The 70th Berlinale is just over. We will write about some films that we were able to see soon. Beyond you find the main awards of Berlinale 2020. With more than 400 films shown the German film festival attracts the largest audience of any film festiwal in the world.  Berlinale (Internationale Filmfestspiele Berlin) has a rich history: it was created in 1951, at the beginning of the Cold War. Shaped by the post-war period and the unique situation of a divided city, the Berlinale has developed into a special place of intercultural exchange. This year it was not different. See what the international juries found interesting.  Berlinale Awards 2020
Prześlij komentarz
Czytaj więcej