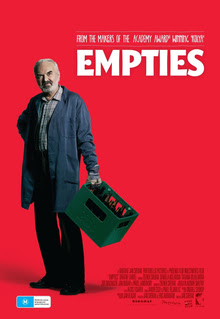 We love Czech comedies! Yes, we know, we are not unique. Perhaps mostly of you have already seen Empties but it is still worth mentioning. This film tells a story of an elderly literature teacher from a high school in Prague. Josef Tkaloun, set up by his lazy pupils, decides to quite the job. Instead of getting retired he undertakes new professional challenges. He starts to bike as a courier but he soon realizes that it is not for him. Josef is physically fit but digitally illiterate. Next choice is a supermarket where he recycles glass bottles, the empties. And the new life begins – with new inspirations, observations, flirts…

This film (Vratné lahve – in Czech, 2007) is made by Jan Svěrák. The main role stars his father Zděnek Svěrák. It is the third movie in the trilogy on aging that commenced 1991 with The Elementary School and continued in 1996 with the Oscar-winning Kolya. On the DVD’s extras one can see how the famous family team is working plus some additional scenes, a gallery, the storyboard and comics.

Empties is a moving Czech comedy – good for laughing and thinking over. Is an old, pardon, an elderly, person condemned to an empty life, without love and tenderness? This comic love story shows the opposite. We have just seen it for the second time. And enjoyed it as years ago. Each of us has his/her own favorite scene. Paul likes Josef trying to teach literature and me – the mysterious traces on the wall behind the counter. What exactly? Watch it :).

marca 21, 2020
DAU. Natasha - film works in Kharkiv, Ukraine - fot. Wikipedia.org   I have to confess I wasn’t aware of all the controversy the film DAU. Natasha had provoked when I decided to go for a screening of this film. The controversy had circled around the production of the DAU project - shot as 700 hours raw material from 2008 to 2011 on set in Kharkiv/Ukraine - as well as in particular the torture scene of the DAU.Natasha installment depicting a women forced to insert a bottle into her vagina. I’d dare to guess that Russian main regisseur  Ilya Khrzhanovsky deliberately choose to scandalize his DAU-films and its production on set as a kind of shock advertisement. Khrzhanovsky might have followed a trick often used by Vladimir Sorokin , the Russian playwright initially involved into his DAU project but parting soon over differences. However it was, let me write down, why I (dis)liked that film. DAU. Natasha - grandest cinematic experiment in Russia The film deals wit
Publikowanie komentarza
Czytaj więcej

lutego 16, 2018
Must Alpininst - Ghost Mountaineer   How to get surprised by good films from distant places? The easiest way is asking locals for tips when you are there. This wasn’t possible this time, but a friend of us happened to be in Tallinn for few days. “There is a good DVD department, go there - Paul told   him after having written down his want-list. - And then ask the shop assistant what he/she would suggest in addition to that list”. “And you really will pay for that all, not knowing what he'll suggest?" - our friend asked puzzled. “Yes, don’t worry! - Paul said. This is how we got Ghost Mountaineer (Must Alpinist - in Estonian).  That film was an excellent choice. Thanks to that unknown shop assistant!  And to our friend! Film from Estonia about Siberia in the 80. The film starts with some brownish amateur pictures and a women voice from the off. First we were not sure whether it's a documentary or a feature film. It turned out to be a mix, with the most pa
Publikowanie komentarza
Czytaj więcej

Wolkenbruch – a successful Swiss comedy among the Jewish minority

listopada 28, 2018
Wolkenbruch - a successful Swiss  comedy When Paul was a boy his parents often drove via Zurich to Bern. The quickest way coming from the South passed through the so called Kreis 3. Especially on Saturdays this calm and seemingly boring part of Zurich turned into a different place. Bearded men with long black coats and big hats were walking around. – Who are they? – Paul asked his parents. – They are going to their church service – explained his mother. – Church, on Saturday? – Paul wondered.  Wolkenbruch - best Swiss film 2018 Almost forty years later, during our visit to Switzerland, the biggest cinema hit is called “Wolkenbruch”. The film staged exactly in this part of the city is a love story. A young orthodox Jew, Motti (Mordechai), feels attracted by his fellow student Laura, while his energetic and dominant mother tries her matchmaking skills within the Jewish community. After many fruitless attempts, upon a Rabbi suggestion, Motti’s parents send him to Isra
Publikowanie komentarza
Czytaj więcej