The Jewish Cardinal from Notre Dame 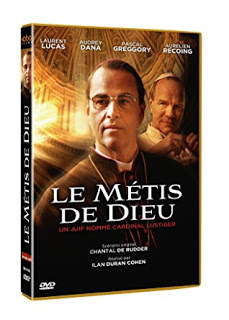 The Jewish Cardinal is a French feature film from 2012 about Jean-Marie Lustiger, born Aron Lustiger. His turbulent life was everything but ordinary - Aaron Lustiger was the son of immigrants, Polish Jews, who came to France. And where he became the charismatic archbishop of Paris. This biographical film emphasizes its strategic role between Christianity and Judaism.

Born in Paris in 1926, he converted to Catholicism in 1940, in occupied France. He studied at the Lycée Montaigne in Paris, then in Orléans and later at the Sorbonne. Jean-Marie Lustiger was elected to the Académie Française, in 1996 he was introduced to the famous hall sous la Coupole. He considered himself the son of the Old and New Testaments. There was no surprise when his cousin Arno Lustiger, a German historian of Polish descent and survivor of the Holocaust, spoke Caddish, the Jewish prayer,  at the cardinal's tomb. 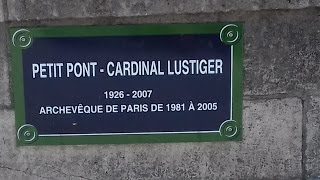 Jean-Marie Lustiger died in August 2007. President Nicolas Sarkozy interrupted his holiday in the United States to attend his funeral. A French cardinal born in a Jewish family from Będzin in Poland. One of the most important clergy of our time. His appointment as archbishop of Paris in 1981 was an event. The International Herald Tribune dedicated to it four columns on the first page. The decision of Pope John Paul II was seen as a provocation. Just like himself. "I am a cardinal, a Jew, a son of immigrants" - he used to say about himself.

The "Jewish Cardinal" and the Polish Pope

The "Jewish Cardinal" and the Polish Pope were close friends. Cardinal Lustiger was regarded as a confidant of John Paul II and had a great influence on what the Pope did for the Christian-Jewish reconciliation.

He was neither a traditionalist nor a liberal. He was able to introduce innovative pastoral solutions, but at the same time he was e.g. decisively opposed to abortion. It was not uncommon for the conservatives to accuse him of progressiveness, and for the liberals – of conservatism. He was controversial also because of his roots. Some Jews accused him of "betraying Judaism," and some Catholics - "Judaizing Christianity."

The Cathedral of Notre Dame in Paris was full whenever he delivered his sermons. He kept saying that people must settle accounts with God both from their talents and from their  works of mercy. The Polish translator of his book "Le choix de Dieu" ("God's choice") once asked him which meaning of this title was right - that God chose him or that he chose God? The cardinal replied - both.

There is a plaque placed for him in the cathedral Notre-Dame in Paris. Cardinal Lustiger wrote the text himself: "I was born a Jew. I carry the name of my paternal grandfather, Aron. Having become a Christian through faith and baptism, I remained a Jew, as did the apostles. My holy patrons are the high priest Aron, the holy apostle John, the holy Mary full of Grace. Appointed as the 139th Archbishop of Paris by Pope John Paul II, I was enthroned in this cathedral on February 27, 1981, and did all my priestly service here. Who goes by here may pray for me. " - Aron Jean-Marie Cardinal Lustiger, Archbishop of Paris. So far the true story. 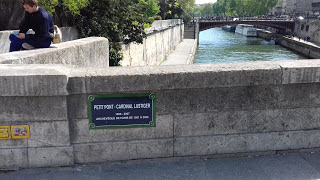 In the movie we can watch this unconventional clergyman especially since 1979, when he was appointed by Pope John Paul II as Bishop of Orléans, until his death in 2007. "The Jewish Cardinal" (Le métis de Dieu)  was directed by Ilan Duran Cohen, a native Israeli, and the music was composed by Nathaniel Méchaly. The script was written by Chantal de Rudder, a former journalist and editor-in-chief (with Nouvel Observateur), who now works primarily as a scriptwriter.

At the end we must admit something – we have not seen this movie yet. Though we will make it up as soon as possible. Particularly that we had the chance to meet this charismatic priest during his visit to Poland. And his book “The God’s choice” has its right place on our bookshelves. 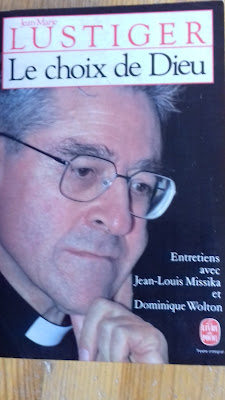 lutego 16, 2018
Must Alpininst - Ghost Mountaineer   How to get surprised by good films from distant places? The easiest way is asking locals for tips when you are there. This wasn’t possible this time, but a friend of us happened to be in Tallinn for few days. “There is a good DVD department, go there - Paul told   him after having written down his want-list. - And then ask the shop assistant what he/she would suggest in addition to that list”. “And you really will pay for that all, not knowing what he'll suggest?" - our friend asked puzzled. “Yes, don’t worry! - Paul said. This is how we got Ghost Mountaineer (Must Alpinist - in Estonian).  That film was an excellent choice. Thanks to that unknown shop assistant!  And to our friend! Film from Estonia about Siberia in the 80. The film starts with some brownish amateur pictures and a women voice from the off. First we were not sure whether it's a documentary or a feature film. It turned out to be a mix, with the most pa
Prześlij komentarz
Czytaj więcej

marca 01, 2020
Berlinale 2020 - The 70th German Film Festival - Fot. Paul It was that time of the year again – for eleven days in February Berlin has been totally dominated by Cinema. The 70th Berlinale is just over. We will write about some films that we were able to see soon. Beyond you find the main awards of Berlinale 2020. With more than 400 films shown the German film festival attracts the largest audience of any film festiwal in the world.  Berlinale (Internationale Filmfestspiele Berlin) has a rich history: it was created in 1951, at the beginning of the Cold War. Shaped by the post-war period and the unique situation of a divided city, the Berlinale has developed into a special place of intercultural exchange. This year it was not different. See what the international juries found interesting.  Berlinale Awards 2020
Prześlij komentarz
Czytaj więcej